As you may have heard, the Chinese government is investing quite heavily in artificial intelligence (AI), aiming to become a world leader in the field within the next decade. And some in the U.S. believe it. But if I were advising the PRC government, I would suggest that this may not be the best field for China to focus on. The old tradition of a rote memory approach to learning is still thriving in China. There is no change likely, as it is a cultural issue, not just policy. And rote memory thinking is absolutely antithetical to good AI.

As I write this in China, the emphasis on AI is in evidence in many ways. One that really struck me the other day emerged in my visit to my favorite bookstore in China, Shanghai’s Shucheng (“Book City”). Wonderful place, five or six floors, mostly in Chinese. And there it was, an entire table devoted to AI: 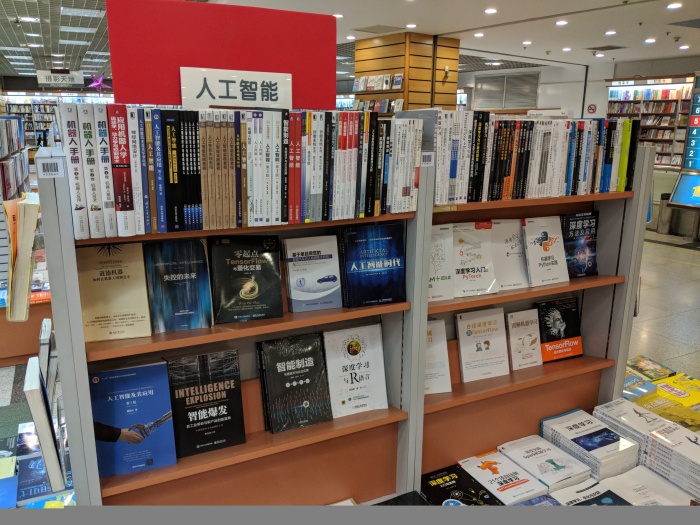 The other side of the table, not pictured, is also completely filled with AI titles.

This put AI on an equal footing with famous programming languages such as C++ and Java, and dwarfed the stock of two or three AI titles I saw on my last visit two years ago.

And yet, my talk about AI at a Chinese university the week before exposed the major cultural obstacle I described above. The hospitality shown me was great, and people asked good questions during the Q&A at the end of the talk. But one of the questions floored me: “How can you be so passionate about your subject matter?” I believe that the questioner, a grad student, was curious about this because he himself lacked such passion. He was there to study this field mainly because of a perceived hot job market. He will learn a few AI methods, but will have no idea as to what they really mean in actual applications. Keen intuitive insight is key in applications, and the rote-memory, learn-some-recipes approach just won’t work well.

This was not an isolated incident by any means, as I have written in detail before. Indeed, even though the professor who invited me does have a genuine interest in the subject, he too wondered about my passion, saying “It’s amazing that you are still so active” (i.e. in spite of my gray hair).

With such a huge population, China does in fact have some people who are not rote-memory oriented, and who are quite creative. Unfortunately, the system does not favor them, and arguably tends to weed them out. The Chinese government is aware of this and wants very much to remedy it, but I don’t think even they realize how deep the cultural roots go on this matter.

So, fear in the U.S. that China is breathing down its neck on AI is misguided. But so is the hoopla on AI itself. What is today regarded as AI is not traditional artificial intelligence in the first place. “AI” today means machine learning, which in turn is hype about old nonparametric statistical prediction methods, applied to modern huge and complex data sets. Highly important and useful, yes, but not new.

Those of us who grew up with Samuelson’s ubiquitous economics textbook “learned” that trade between two nations benefits both. Unfortunately, everyone took it for granted that the “benefit,” an increase in GDP, accrues to all. Even Samuelson rather recanted on this toward the end of his life, but many of those who never went beyond his book are believers. They are then easy marks for those with vested interests in promoting the globalist philosophy.

Hence the constant drumbeat in the mainstream media: Globalism is good for you, Trump missed a great opportunity by not participating in TPP, and so on.

I’m still in China as I write this. Recently on the train from Shanghai to Ningbo, I happened to be sitting next to a friendly, talkative man who is the general manager of a Chinese electronics company. Apparently the Trump administration had blocked his firm from doing business with the U.S., and the GM gave me the same line, that Trump is fighting against the natural world order in which everyone benefits from trade.

In light of all this, I was pleased to be tipped off by a reader concerning this article. This passage is refreshing, to say the least:

Take, for instance, Caterpillar. The United States’ 74th largest company has long been a symbol of domestic advanced manufacturing prowess, a firm that leverages American ingenuity to take capitalize on growth around the globe. Since announcing a big bet on the China market in 2010, Caterpillar’s stock has soared 178%. But that success hasn’t translated in to more American jobs, as the firm employs fewer Americans today than eight years ago, according to its latest annual report.

Interesting in that I read this the same day I went past a large Caterpillar building in Shanghai. But how can this seemingly contradictory situation arise? Over the years of writing on these topics, I’ve proposed some thought experiments that explain why.

This was during the time NYT journalist Tom Friedman was telling us that “the world is flat,” his symbol for the benefits of globalism. Yes, Friedman told us, some IT work is being shipped from the U.S. to India, but those Indian coding shops are cooled by Carrier air conditioners, thus creating jobs for American engineers. I countered that engineers are basically a fixed cost for Carrier; selling extra AC units in India is not likely to require the firm to hire many more engineers, if any. And as to U.S. factory workers, well, where is Carrier likely to manufacture those AC units to be sold in India? Roy Beck’s old quip about U.S. firms preferring to do their IT in India instead of Indiana probably applies here.

Ironically, years later Carrier was the first firm that Trump tried to strongarm/sweet talk into keeping jobs in the U.S. The results have been mixed so far, but thank you, Tom Friedman, for the suggestion. 🙂

I am in China currently, and the other day I gave a talk at a Chinese university. The hospitality was wonderful, and we had a great exchange on the topic of my talk (neural networks, and why I believe these modern things are actually equivalent to some very old-fashioned ones).

We were joined at a delicious lunch by a pleasant young professor who is the local Party Secretary. Though that may sound ominous to some in the U.S., it is basically analogous to the role of a shop steward in a unionized U.S. company. But yes, she is representing the government, and when the topic of politics came up, she politely expressed concern about Trump administration policies. Were they worried about tariffs? Of course not. No, their fear was that Trump would reduce the number of foreign students from China allowed to come to the U.S. for study.

Knowing from past experience not to get into politics in these situations, I replied, “Well, this is a highly complex issue,” and left it at that. I could have stated (as they may have already known) that I have my own concerns about the foreign student program. Policy really should be tightened up, though of course not specific to China and possibly not directly involving the F-1 student visa. Reducing the H-1B and employer-based green card programs would reduce the number of foreign students, though not necessarily surgically.

One of the problems to be fixed is the “two fer” regulation set by the Obama administration that granted work rights to certain H-1B spouses, which the Trump administration is now considering reversing. A former H-1B spouse, who became a U.S. citizen years ago, recently wrote a New York Times op-ed in which she describes the Trump people as being misinformed if not downright xenophobic demagogues.

The author of course brings in the obligatory “It’s not a zero-sum game” argument.

Restrictionists assume a zero-sum math for workers: A job gain for a foreigner  is a job loss for an American. By that logic every college graduate who enters the job market would be cause for mourning. But that’s backward, given that skilled individuals create, not take away, jobs, and no economy succeeds by shackling qualified people.

The fact is that if a profession has a labor surplus, producing lots of new graduates in that profession IS a problem. In fact, occasionally a responsible university will indeed reduce the size of such a program.

And if that profession suffers from rampant age discrimination, as in the computer fields, it is especially not a zero-sum game situation, Young new graduates are hired in lieu of older (35+) professionals. In fact, the author’s statement,

actually is the root of the PROBLEM, rather than the virtue she views it as. Sadly, the REASON those are now viewed as “peak productive years” — which wasn’t the case in pre-H-1B times — is in fact the overproduction of new graduates. That excess is largely due to the foreign student program. And granting work permission to some H-1B spouses makes that even worse.

My stance is yes, one can sympathize with the forced unemployment of those spouses, so they SHOULD be allowed to work. But, for the reasons given above, they should count toward the H-1B cap. Otherwise it is indeed gaming the system.

Note carefully that China really does have a “Best and Brightest only” technical immigration policy. They welcome (only) those who are prominent in their field to come work in China, and pay them a pretty penny, quite a contrast to America’s discount-rate policy.